Rise of the robots

Technology and the Threat of a Jobless Future 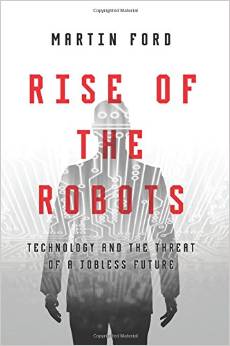 Rise of the Robots: Technology and the Threat of a Jobless Future by Martin Ford was published in 2015. This book had interesting views on how robots (AI / automation) could put risks on the employments which could eventually impact our economy. The author gives a brief introduction to the current status of the technology. He also discusses the paradigm shift in education, health care challenges, and the future ahead of us where he interestingly brings the discussion of the inevitable “singularity”.

There are definitely change in our society. The author lays down one of the comparisons against the past,

“In 2012, Google, for example, generated a profit of nearly $14 billion while employing fewer than 38,000 people. Contrast that with the automotive industry. At peak employment in 1979, General Motors alone had nearly 840,000 workers but earned only about $11 billion—20 percent less than what Google raked in. And, yes, that’s after adjusting for inflation.”

This is a very good view of how much society changed compared to before. The changes are obviously happening which are to be recognized and accepted progressively. However, we should avoid “comparing” ourselves to the past. We should definitely “learn” from the past mistakes but I believe there is no point in making comparisons to the past vs present. Without any doubts, hiring 840,000 workers in the year 1979 was the best option for GM at that time. It’s what those guys could do best at that time of what they had. The point of this quote is probably to understand the improvements in our society as the years are passing by and recognize and accept the changes.

As a person with the interest in robots for quite some time, I have my own inputs and thoughts regarding the robots. I wanted to compare my thoughts in contrast to the author’s to review the different characteristics. Obviously, I am not agreeing with every topic written in the book. I would say these topics could be approached side by side with author’s opinions but in slightly different manner. Let me briefly comment on my thoughts on some of these topics.