We probably are familiar with what the word, “Leap Year”, which adds an extra “Leap Day” (Feb 29th) to our calendar year every 4 years with some exceptions. So Leap year would have 366 days in one year. According to the calendar type majority of us use, one year is defined as the time it takes for the Earth to orbit around the sun once. However, to be exact, it takes the Earth about 365 1/4 days to make one entire orbit around the sun. Approximately, by adding this one day every 4 years the Earth’s orbital point is adjusted. So now we have pretty good understanding of leap year/day, what exactly is a “Leap Second”? 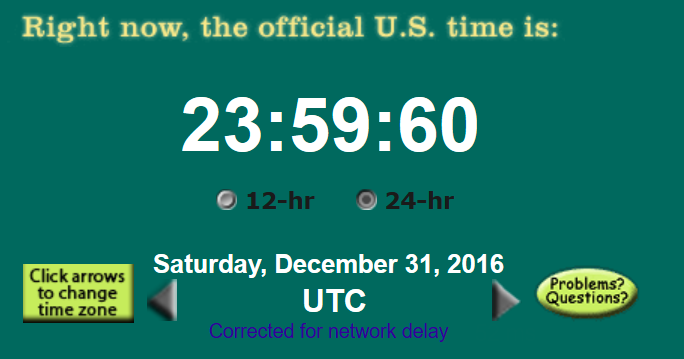 Unlike the leap year, leap seconds are not introduced on a regular schedule, since the variability in the length of the day is not entirely predictable (measure like 365 1/4 days). Like the above picture shows, dials will read 23:59:60 just before midnight as clocks around the world pause for a second to allow the Earth’s rotation to catch up with atomic time. Similar to the leap year, this extra second meant to align standard time with the movement of the earth and sun. It was officially announced its usage in 1972 as UTC timescale also became formal that time. As awareness of timezones grows, adjusting time became critical even to a second and that this “leap second” is required to adjust times around the world to their seasons (aka earth’s rotation). There were 27 leap seconds so far until December 31st, 2016. Including the recent one, that is 28 seconds we added from 1972 so far! Theoretically, it is possible to -ve a second but none of our leap seconds were ever -ve. Given the slowing of the Earth’s rotation, it is unlikely that a negative leap second will ever occur. Earth will need to rotate faster for that second to be omitted. Anyways, slower Earth rotation means our length of the day is growing.

A bunch of problems occurred already and more could happen in the future. One example of such problem could be when GPS constellation advertised of this extra second months before it actually happened. Many GPS receivers automatically applied this right away when they received this advertisement. There are multiple preventions one can make and example is on US Homeland Security. Google solved this problem via so-called “leap smear” and many other vendors followed and applied similar fixes.